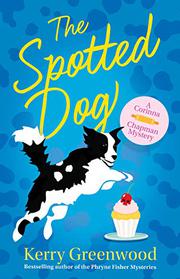 The delightfully laid-back Corinna (Cooking the Books, 2012, etc.) and her talented apprentice, reformed junkie Jason, are up early baking for her shop, Earthly Delights, when retired Sgt. Alastair Sinclair arrives and swiftly collapses, but not before showing Corinna a note from her friend Sister Mary saying that Daniel will be able to help him. Sinclair is haunted and exhausted by the loss of Geordie, the sniffing dog companion who served with him in Afghanistan. Unable to fathom a reason for his having been attacked and Geordie stolen, he’s come to Daniel for help while Sister Mary has people out on the streets searching. Daniel uses all his connections as a Mossad agent in search of Geordie and the reason for his dognapping. Meanwhile, the peace of Insula—Corinna’s unusual apartment house, where mostly charming tenants enjoy spending time sharing food and drink in the magnificent roof garden—is disturbed when the panic alarm goes off in the apartment of professor Monk, a biblical scholar whose neighbors arrive to help guard a captured thief until the police arrive. The putative thief is a young man, a Catholic religious fanatic looking for something he thinks Monk possesses that belongs to the church. When a ninjalike figure breaks into Corinna’s home, she furiously attacks him with her umbrella before he manages to knock her out. It’s possible that one of the rival gangs may have dognapped Geordie for his sniffing abilities, but Corinna and Daniel are puzzled by the apparently unrelated break-ins. Their sophisticated and ditzy friends, from witches to spies, are lovingly portrayed along with a bounty of food and drink, all sizzling under the summer sun.

Sterling prose and captivating characters enhance a topical mystery with surprising undertones out of Dan Brown.