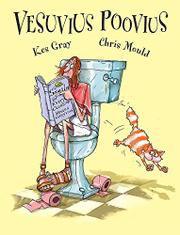 Lovers of caca-poopoo humor will be in hog heaven with this imported tale of an inventor who takes on Ancient Rome’s pongiest problem. As no one knows what to do with their dung, the city is one big, open sewer—until young Vesuvius Poovius, having tried and discarded various alternatives, invents plumbing: “the Vesuvius Poovius Loovius, or ‘Loo’ for short.” Now, how to get the Emperor and his wife to try it out? Though Mould’s scritch-scratch cartoon scenes feature plenty of clutter but only an occasional glop of goo, Gray’s roiling mix of disgusting Roman cuisine—sheep’s eye dumplings, beetle pizza, and the like—and arch euphemisms (“I did a huge daffodil last night,” a soldier comments) will certainly crank up the sniggers. As chain-pullers go, it could be worse, as there are occasional lumps of cleverness—but delicacy has definitely gone down the tubes. (Picture book. 6-8)