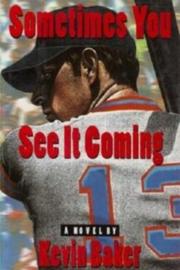 SOMETIMES YOU SEE IT COMING

First-time novelist Baker makes it to the playoffs with this neo-mythic entry in a baseball subgenre pioneered by Bernard Malamud (The Natural) and advanced by George Plimpton (The Curious Case of Sidd Finch): the story of the rookie from nowhere who blossoms into the greatest player in the history of the game. This time out, the Ruthian giant is one John Barr, a tall, taciturn stranger with ``drowned man's eyes'' who hitchhikes to Hell's Gate, Virginia—home of a New York Mets minor-league franchise—muttering only that ``I came to play.'' So he does, like a dervish in spikes, and takes the sport by storm. Baker unfolds Barr's story through a patchwork of first-person voices, most of them just this side of the nuthouse. There's Rapid Rickey Falls, (``The Old Swizzlehead''), a philandering black slugger who becomes Barr's main ally; Ellsworth Pippin, the patronizing, parsimonious owner of the Mets; Ol' Cal Rigby, a Casey Stengelish manager who carries his false eyes in a box; Stillwater Norman, the dumbest man alive, who dies from choking on a clam; and their peers, the team-as-human-zoo, flashing spikes and bedding groupies with adolescent glee. Sparked by Barr, the crew wins seven pennants and five World Series, the key games recounted by Old Swizzlehead and other voices with high-five thrills. None of these victories, however, teases so much as a smile from the stolid, enigmatic Barr. Herein lies a mystery: What engine drives this strange superstar who avoids girls, disdains money, stays locked within himself? Miniskirted Ellie Jay, ``The Queen of Sportswriters,'' probes without avail. The reader learns the secret, however, in the book's only gaffe—a series of somber, overripe Freudian flashbacks that situate Barr's icy talent in his violence-strewn childhood. Barring the Freudian glop, baseball as it's meant to be.