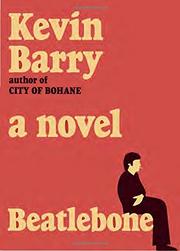 A famous musician’s 1978 pilgrimage to an island off the west coast of Ireland takes several detours, abetted by his memories and his minder, in this original, lyrical, genre-challenging work.

Barry set his remarkable first novel, City of Bohane (2011), some 40 years in the future. Here, he looks back almost 40 years as he imagines a 37-year-old John Lennon hoping he can cure a creative block with a few days alone on the tiny island he owns. When he arrives in western Ireland, he learns that reporters are in pursuit, and he struggles to dodge them with the help of his driver/facilitator, Cornelius, who stashes him at one point in the strange Amethyst Hotel. There, John, a veteran of primal scream therapy, encounters people who believe screaming and ranting at one another is good for the soul and psyche. In the course of this miniodyssey, John’s mind wends through his past, growing up in Liverpool, a girlfriend named Julia, and his Irish antecedents. He has brilliant, funny, almost musical dialogue with Cornelius. Then, after 200 pages, the author/narrator breaks in and explains how he has tried “to spring a story” from some historical facts. He also retraces what might have been John’s steps, including poking through the now-ruined Amethyst. A photograph of the hotel printed on one page suggests W.G. Sebald and the porous membrane between fiction and reality. The closing section features more delightful dialogue, now between John and his recording engineer, before the musician breaks into a Molly Bloom–esque monologue, complete with a lilting last line about “a sadness” in his mother’s voice “that tells me the way that time moves and summer soon across the trees will spin its green strands.”

Nothing at all like Barry's award-winning debut novel, this may be a risky follow-up, but it’s intriguing at every turn, and Barry’s prose can be as mesmerizing as some of his hero’s songs.