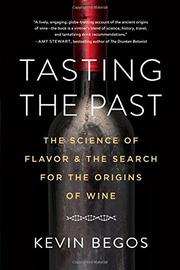 You don’t need to be an oenophile to enjoy this flavorful adventure about one wine nerd’s search for the perfect grape.

In 2008, when former AP correspondent Begos was in his hotel room in Amman, Jordan, he took a red wine named Cremisan out of the mini-bar. He wasn’t expecting much, but “wow. I perked up immediately. The dry red wine had a spicy flavor.” As he writes, “my hotel room wine morphed from an obsession into training wheels,” and he was off on a two-year quest to learn more. Begos traveled through the original wine routes from the Caucasus Mountains and the Holy Land and north through Europe. He soon realized that it was not the wine he was seeking but the grape or grapes from which the wine was made. There would be more wine sampling ahead and interviews with experts who would provide him with “facts instead of just colorful myths.” At the University of Pennsylvania, archaeologist Patrick McGovern, the “Indiana Jones of ancient wine and beer,” taught the author how tests using liquid chromatography have helped identify types of wines in King Tut’s tomb. At the Cremisan monastery in Jerusalem, Begos discovered that his 2008 wine was probably made in 2006, “so I’d tasted one of the last vintages made by the monks.” In a small city on the Rhone, the author learned about ampelography while visiting with Jose Vouillamoz, a “kind of John James Audubon for endangered grapes.” It was like studying “branches (or vines) twisting in all directions, each shoot representing a different variety, a new flavor.” Others taught Begos about the importance of the soil (terroir) and yeast in the fermentation process. His “biggest American winemaking surprise came from Oregon,” which “may be the epicenter of wine innovation in America, even if there’s more money in California or New York.”

The narrative occasionally drags, but this multidisciplinary master class in the history, science, religion, and literature of wines is as luscious as a full-bodied pinot noir.