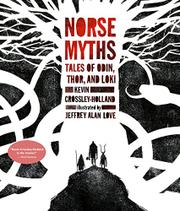 Tales of Odin, Thor and Loki

Twenty tales of gods, giants, and dwarfs, of mighty feats and epic trickery.

Veteran storysmith Crossley-Holland has presented versions of these extracts from the Prose Edda before, but here he recasts them into stately retellings that get extra measures of menace and gloom from the heavy shadows and big, indistinct figures that Love places on nearly every double-columned spread. Opening with tributes to the myths and to Snorri Sturluson, their medieval Icelandic recorder, the author moves on to the stories themselves. He includes such familiar episodes as the building of Asgard’s walls, Thor’s “wedding,” (which, what with its closing massacre, comes off as more grimdark than humorous, as played elsewhere), and the death of Balder within the frame story of the Swedish king Gylfi’s sojourns to Valhalla. There he hears from a mysterious, enthroned trio (some of the original source’s Christian inflections are left in for observant readers to notice) of Yggdrasil, the nine worlds, and, finally, the deaths of Odin and the rest. The major themes of deceit and violence play louder here than loyalty, justice, or some other positive value, and women (along with Bragi, the “pink cheeked and girlish” god of poetry) are relegated to minor roles. Still, the tales are colored as much by their depictions of courage in the face of certain ultimate doom as by the illustrations and are thus powerful in emotional resonance—not to mention chock-full of bold deeds, glittering treasures, and scary monsters.