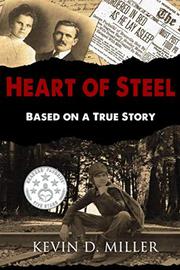 Based on a True Story
by Kevin D. Miller
BUY NOW FROM
AMAZON
LOCAL BOOKSELLER
GET WEEKLY BOOK RECOMMENDATIONS:

This debut historical novel chronicles a boy’s journey from his childhood home to an orphanage and the chain of events that leads him to change his name.

Stanley William Puchalski’s mother wakes him early one fall morning in 1920 in Southington, Ohio, to send him on the most urgent errand of his life—fetch the sheriff to investigate his father’s murder. It seems that a group of men broke into the family’s farmhouse to steal some money and shot the boy’s father, George, in his bedroom. Things haven’t always gone smoothly on the family farm. George was a harsh taskmaster for all the hands working there, even his wife, Stella, and young Stanley as well as the boy’s brothers and sister. All their hard work made George a well-off patriarch, but he didn’t share the rewards. He got drunk constantly and subjected his family to endless bursts of violent abuse. As the oldest son, Stanley wished he could step in, but he was too young to stand against Papa’s fury. That fateful evening, the boy heard a sharp crack in the middle of the night. Once the police arrive, Stella’s story starts to make less and less sense. The timing’s off, the supposed thieves sound a lot like family relatives, and there’s no trace of their car leaving the farm. And when Stella is arrested for the murder of her husband, there’s no one left to take care of Stanley and his siblings. The kids are put in the County Children’s Home, an orphanage in an old mansion, and the cruel caretakers and older bullies make the place seem like little improvement over life on the farm. In this novel based on his family’s history, Miller writes about his grandfather in a dramatic, vivid manner and a shifting third-person perspective. The author offers readers a fast-paced, cinematic tale that covers Stanley’s travails—which include changing his last name to Miller at the age of 13 and working in a Chicago steel mill—rather than a sober, minutiae-filled biography. Unfortunately, the book’s descriptive style is sometimes overwrought, which makes the prose sound overenthusiastic (“Her wavy chestnut curls flow softly in the gentle breeze, kissed by the afternoon sunlight creating shimmers of auburn highlights in her hair”).

An intriguing but uneven tale involving the murder of a patriarch.

THE STORY OF EDGAR SAWTELLE
by David Wroblewski
Indie