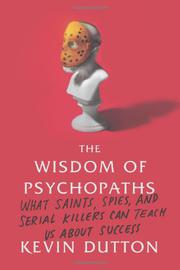 THE WISDOM OF PSYCHOPATHS

What Saints, Spies, and Serial Killers Can Teach Us About Success

Psychopaths who commit violent crimes are at one end of a spectrum that also includes solid citizens.

That’s the contention of Dutton (Split-Second Persuasion, 2010, etc.), a research psychologist at Cambridge. Psychopathic killers have the “consummate ability” to disguise their true nature, he writes, while “behind the façade—the brutal, brilliant disguise—beats the refrigerated heart of a ruthless, glacial predator.” The capability to act under stress with cool determination is a characteristic they share with “surgeons, soldiers, spies, entrepreneurs [and] lawyers.” Dutton hazards the guess that a small helping of one particular psychopathic quality can confer surprising benefits for society as well as the individual. The quality in question is the ability to detach from one's emotions in order to make purely rational decisions. Willingness to take calculated risks, coupled with a charming demeanor, can lead to success in the boardroom as well as the bedroom. The author distinguishes between the “hot empathy” of the I-feel-your-pain average personality and the “cold empathy” that sniffs out levers by which to manipulate people’s vulnerabilities. He cites research using psychological profiling tests and fMRI brain scans, which establish a ranking of individuals by profession and personality type, to make his case that there is a “neuropsychological continuum.” Dutton interviewed con men and killers in prison, top surgeons and a childhood friend who works for MI5, among others. He also submitted himself to an experiment that damped down a region of his brain linked to emotional response, leaving him with what he describes as a “subjective moral swagger” that he associates with a psychopathic mindset. Arguing that society today overemphasizes winner-take-all competitiveness, Dutton worries that this may push more people toward the psychopathic end of the spectrum and lead to a greater rate of violence.

An enjoyable, breezy treatment of a provocative subject.