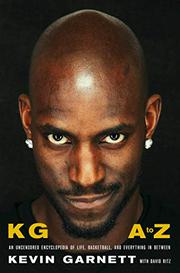 An Uncensored Encyclopedia of Life, Basketball, and Everything in Between

by Kevin Garnett with David Ritz

The life and career of one of the NBA’s all-time greats.

Like many sports and celebrity memoirs, this one is a mixed bag. Early in the book, Garnett, writing with Ritz, admits to not being “the kind of dude who’s gonna kick back on the couch with a book for an hour or two.” Therefore, “I wanna write the kind of book I’d wanna read. I wanted to change it up, do it differently.” The kind of book Garnett, who has ADD, ADHD, and dyslexia, would want to read is encyclopedic in form: short entries that allow readers to experience reading as he does: “read a page or two, and then bounce.” In the same vein as Amy Krouse Rosenthal’s Encyclopedia of an Ordinary Life, this book challenges formal expectations while finally adhering to them. The narrative of Garnett’s life doesn’t run straight through the book, but it zigzags intuitively, rendered in candid prose rife with incomplete sentences. The encyclopedia entries read as if Ritz transcribed them from Garnett’s unscripted recordings. While the text captures the peerless intensity that Garnett displayed on the court, it can be exhausting to engage with for longer than the recommended “page or two.” However, there are exceptions that show the author’s wit—e.g., the entry, in full, for Wu-Tang Clan: “Ain’t Nuthing ta Fuck Wit”—and it’s refreshing when we encounter the thoughtful Garnett. Writing about retirement, for example, he notes, “I didn’t always like myself when I was playing. I was a different person. I transformed. I wasn’t Kevin….I don’t go around moping that I ain’t playing no more. I watch NBA games on TV with pleasure, not regret. I don’t fantasize about being out there.” It’s unfortunate that such self-reflection isn’t on display as much as one might expect from such an energetic, outspoken personality.

A gift for die-hard Garnett fans with less appeal for casual hoops fans and general readers.