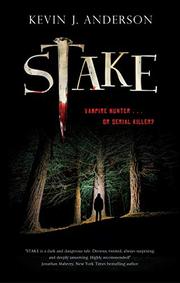 Dauntingly prolific Anderson steps away from his farcical series starring Dan Shamble, zombie PI, for a much more straight-faced search for vampires in Colorado Springs.

Back from his traumatizing service in the Bosnian War, David Grundy takes the name Simon Helsing as a cover for his newfound peacetime vocation: hunting vampires. Following up on a list of characters he considers suspicious mainly because they work at night, he drives a stake through the heart of convenience store clerk Mark Stallings and eliminates Douglas Eldridge, a fellow Bosnia vet, before a killing he didn’t count on sends him into hiding. Helsing’s only remaining ties are to Lucius, the head of the Bastion, a shadowy group dedicated to rooting out vampires wherever they can be found, and to Alexis Tarada, a freelance researcher whose website, HideTruth.com, does its impartial best to weigh the evidence for and against supernatural beings, evidence that Detective Todd Carrow, of the Colorado Springs Police Department, would reflexively brand as paranoid raving. Like Helsing, who shares his list of suspected vampires with Alexis, Carrow is willing to play along with her but only up to a point: “Vampires don’t have to be real, but the killer certainly is.” So although they might frame the question in different terms, all three leading characters would agree that the main questions here are whether there really are vampires and what we should do if there are.

Competent but unmemorable, especially by Anderson’s own standards.