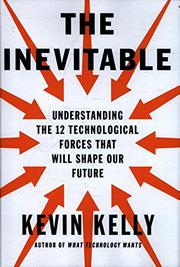 Understanding the 12 Technological Forces that Will Shape Our Future

That futurists have a terrible record hasn’t discouraged them, and this delightful addition to the genre does not deny that predictions have been wildly off-base.

The reason that futurists are often wrong is that people assume the future will resemble the present except for improvements or decay. Three decades ago, relevant observers assumed that the Internet would become “five thousand TV channels”—paradise for the couch potato. Few saw that viewers would take over, sucking up (but rarely paying for) traditional journalism, art, and entertainment and producing their own. Unfathomable technological changes are in the works, writes Wired founding executive editor (and current “senior maverick”) Kelly (What Technology Wants, 2010, etc.), who proceeds to tell us what they will be. While readers will encounter hints of robotic doctors and clothes that give the washing machine cleaning instructions, the author’s 12 ingenious chapters eschew high-tech spectaculars in favor of their driving forces. All the chapter titles are verbs in the present participle form: flowing, cognifying, tracking, accessing, sharing, etc. “Sharing” and instant “Accessing” will make possession irrelevant. If a self-driving car appears as soon as you summon it, owning one is a hassle. “Access is so superior to ownership in many ways that it is driving the frontiers of the economy,” writes Kelly. Eventually, we will live in the world’s largest rental store. In the 19th century, inventors added electricity to tools (fans, washers, pumps, etc.); in the 21st, they will add intelligence: cognifying. “There is nothing as consequential as a dumb thing made smarter,” writes the author. “Even a very tiny amount of useful intelligence embedded into an existing process boosts its effectiveness to a whole other level.”

Kelly’s arguments ring true, and his enthusiasm is contagious. Readers will enjoy the ride provided they forget that he has disobeyed his warning against assuming that today’s trends will continue.