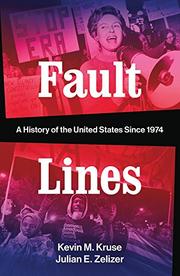 A History of the United States Since 1974

Two Princeton professors add to the burgeoning literature about a fractured America, based largely on their university lectures on the subject.

Kruse (One Nation Under God: How Corporate America Invented Christian America, 2015, etc.) and Zelizer (The Fierce Urgency of Now: Lyndon Johnson, Congress, and the Battle for the Great Society, 2015, etc.) organize their history around four principal fault lines: growing economic inequality, racial division, partisan polarization, and conflicts regarding gender and sexuality. In a clear, lively style, Kruse and Zelizer show how developments in these areas have divided the nation and made compromises for the common good more difficult. In coverage of the earlier years, the authors evenly distribute responsibility for the worsening conflicts. However, beginning with the genesis of the Obama administration, the narrative takes on an increasingly leftist slant as the authors minimize or omit the left's contributions to the widening divide, creating the impression that it was largely conservatives who were perpetuating an atmosphere of obstructionism and division. Conspicuously absent, for example, is any mention of intolerance and violence directed at conservative speakers on college campuses or of antifa thuggery generally. Alongside political and social divisions, the authors chronicle the fragmentation of American media, with three major TV networks and relatively sober newspapers of national stature replaced by cable TV, talk radio, and an infinite number of commentators on internet blogs and social media. As is well-known, this multiplicity of sources has led not to a better informed public but to the creation of partisan echo chambers that disagree even about fundamental facts, let alone their interpretation. The authors posit no overarching theories of how all this came about, nor do they offer a path forward to a better place. In discouraging detail, they lay out how short-sighted decisions and inflexible partisanship have placed a consensus on national identity and goals so far out of reach.

A left-leaning but readable, comprehensive history of the political and cultural trends that continue to erode any sense of American national unity.