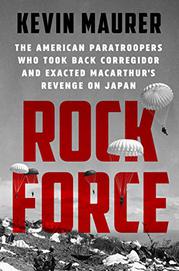 A history of the fierce 1945 battle to recapture the island fortress in Manila harbor.

The U.S. suffered the greatest military defeat in its history after the Japanese invasion of the Philippines in December 1941, although American and Filipino forces on Corregidor held out for a month before surrendering in May 1942. When the Americans returned to the Philippines in October 1944, Corregidor had little strategic but much symbolic value. Journalist Maurer is not the first to recount the nasty battle for its reconquest in February 1945. Carried by a fleet of transport aircraft, 3,000 men of the 503rd parachute regiment dropped on the island’s central high points, a particularly dangerous operation because there were no large open areas. Many men were injured. Expecting an amphibious assault, the Japanese were taken by surprise; however, based inside the island’s extensive tunnels, caves, and fortifications, all were under orders to fight to the death. About 4,500 did so, with only 119 taken prisoner; 228 Americans died. Much of the narrative is a series of gripping, somewhat scattershot accounts of small-unit firefights, ambushes, suicidal attacks, heroic feats, and tragic deaths. The sole map of the entire island is little help in following the action, so readers should sit back and enjoy the fireworks. Although the mission was a combined airborne and amphibious assault, Maurer relies heavily on unpublished memoirs by three paratroopers, so the seaborne landing is only mentioned in passing; readers searching for a more balanced account will need to look elsewhere. Having worked hard and long gathering material, Maurer crafts a narrative that reads less like serious history and more like a novel, with invented dialogue and melodrama. Still, history buffs can be assured that he gets his facts right.

Entertaining popular military history, mostly for fans of the genre.