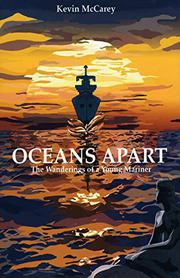 The Wanderings of a Young Mariner

A young, intrepid adventurer escapes his quirky family to discover a life at sea in this Vietnam era memoir.

Emmy-winning filmmaker and author McCarey (Islands Under Fire, 2012) grew up yearning to escape the dankness and insularity of New York state’s Hudson Valley and the weirdness of his Irish family. His father, whom McCarey calls “the Artist,” was a ne’er-do-well, goldbricking cartoon illustrator and admirer of the “Prince Valiant” strip. The Artist influenced his son with his tales of ocean voyages that happened only in his own head. The author’s kleptomaniac mom, Maggie, taught him how to steal, cheat in school, and ditch class. He pervades this narrative of his call to the seafaring life with a wry and insightful awareness of his own and others’ foibles. Smart and capable but an academic disaster, McCarey decided to go to New York Maritime College, a decision celebrated by Maggie but scorned by the Artist: “He ranted about the waste of my ‘precious god-given talent.’ What talent? I wondered.” Replete with many literary references gleaned from his reading at sea during slack times, the author shows a love of sentence fragments that he deploys to great effect in the tales of his many merchant marine voyages, often to Vietnam, aboard rusty hulks shipping material to the war, which he calls “the Beast.” At one point, he becomes interested in the “intriguing hints of life below the water’s surface: A patch of ocean boiling with baitfish. The purple sails of Portuguese man-of wars drifting on the Gulf Stream or moon jellies pulsing in the South China Sea.” The terrifying dangers of loose munitions in the hold during a roiling ocean, his encounters with colorful characters both at sea and in ports of call, his telling observations of human nature, the mindless routine life aboard ship that McCarey finds amusing—all of this the author recounts with humor and an uncanny ear for speech. He uses various dialects, a stylistic habit that may not appeal to every reader. But this is a minor flaw for an author whose gift is rendering the stuff of life on the ocean into vivid and telling prose.

A swashbuckling maritime reminiscence with picaresque edges crafted by a gifted writer.