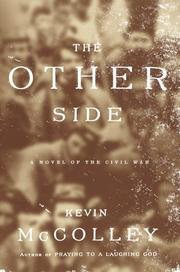 A horrific tale by the author of Praying to a Laughing God (1998) about guerrilla fighting during the Civil War, featuring monsters on both sides.

Blame that on the violent, bloody, and brutalizing conflict—McColley does. He gives us Jacob Wilson, a 17-year-old Ohio farm boy much like any other kid his age at the outset, who is changed drastically by terrible events. It's 1860, the war merely months away. The Wilsons have been hiding a pair of runaway slaves, one of them a pretty young girl with whom Jacob has fallen in love. Led by an arrogant lout of a sergeant, a search party of local militia suddenly descends on the family. A neighbor, a close friend of the Wilsons, helps the slaves escape and is hanged by Sergeant McGown for his trouble. Jacob goes berserk, takes an ax to McGown and another soldier who gets in the way, then flees. After some half-crazed wandering, he winds up in Missouri as a rider in Confederate partisan William Quantrill's infamous band of mounted murderers. (Ideology has nothing to do with which side people end up on in this deeply cynical tale.) Haunted by what he construes as McGown's inescapable ghost, Jacob transforms himself into a remorselessly efficient killing machine. No Union sympathizer, no matter how young or casually identified, is safe. Jacob and his mostly teenaged cohorts slaughter zestfully, insisting quite accurately that Yankee guerrillas are doing the same. Ugly act follows despicable deed, and by the time Quantrill's marauders confront their grim destiny, only shreds of humanity still cling to Jacob.

The intelligent, compassionate, and talented McColley does his best to arouse sympathy for his beset young protagonist, but the later chapters are such a catalogue of horrors that readers are unlikely to be persuaded.