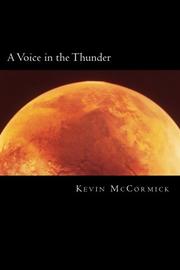 A VOICE IN THE THUNDER

Book One of the Children and Ghosts Quintet
by Kevin McCormick
BUY NOW FROM
AMAZON
BARNES & NOBLE
LOCAL BOOKSELLER
GET WEEKLY BOOK RECOMMENDATIONS:

In McCormick’s epic sci-fi debut, Book 1 of the Children and Ghosts series of five books, the destruction of a desolate planet in a distant system will forever shape the fate of mankind as it sets in motion events of a greater-than-galactic scale.

In a galaxy controlled by the Galactic Coalition, the fledgling independence movements on the frontier planets never have a chance, thanks in particular to the well-funded operations—secretly sponsored by the government—that rob or assassinate separatists in an arrangement known to a select few as “Operation Peacemaker.” But when her associates are killed in front of her while stealing a package from an armored car, career criminal Christmas “Crazy Eyes” Parker is put at odds with both her boss, ruthless industrial magnate Atusa Navarro, and their government contact, Horace Murchison. Out for revenge, Parker seeks to uncover the mystery behind the package she stole that night, and Murchison might have answers. There’s one problem: Parker isn’t the only one looking for him. After Murchison has a religious experience that focuses on the destruction of the planet Mozha II—the ramifications of which are continuously revealed to be greater than readers expect—Murchison disappears. That brings Detective Benjamin Weizmann of the Major Crimes Bureau to planet Eridan, and he intends to do his job even if it means exposing the entire clandestine operation—or breaking the very laws he has sworn to uphold. This work is more than sci-fi adventure, though; even the title—a reference to a 19th-century poem by William Blake—hints at the narrative’s intelligence. McCormick’s attention to detail makes both major and minor characters memorable, each one distinctly motivated and flawed, and although the story’s start is a little rocky, it’s not long before readers will be drawn into the inescapably alluring combination of criminal activity, political intrigue, sci-fi wonderment and unalloyed action. Readers will be frequently astounded at the ingenious ways he finds to tie together the seemingly disparate storylines as events move beyond the reach of any one character’s grasp.

Smart, compelling and multifaceted—promising is an understatement.

THE SILENCE AND THE LIGHT
by Kevin McCormick
Indie

Ghost of the Gods
by Kevin Bohacz
Fiction