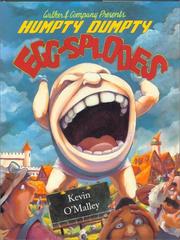 O’Malley throws a spanner in the Mother Goose works when he lets Humpty Dumpty snap and go on a rampage through the land of nursery rhymes. Here, the story is told by the father of a student who is plainly not of nursery-school age, so no holds are barred. As he tells it, while Mother Goose is away, Humpty Dumpty goes berserk from lack of respect. Old King Cole is sitting in for Mother Goose and though he is better known for his merriment than his brains, he tries to do what he can. The king throws what he’s got at the rampaging egg: Peter Piper’s pickled peppers, for instance, and the Duke of York’s 10,000 men, and Peter Pumpkin Eater’s pumpkin. The Muffin Man lends a hand, but it’s up to Humpty Dumpty to self-destruct, sort of, and in the process gain some of that cherished respect from the good folk of nurseryland. (Imagine Humpty as an Elvis impersonator and you get the idea.) Though O’Malley’s comic, high-octane artwork gives the proceedings an edge, there is nothing really vicious in these pages: “He found Jack Horner sitting in a corner. He stole his plum, Christmas pie and all,” is typical. And while O’Malley is busy sticking his finger in the eye of Mother Goose, he also pays homage to the timeless verses by weaving them directly into the text. As bratty as its intended audience, this poaches from the best scramblers. (Picture book. 6-10)