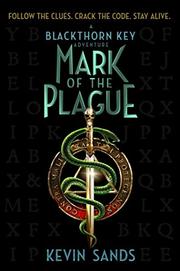 MARK OF THE PLAGUE

From the Blackthorn Key series, volume 2

It is 1665, and the plague has arrived in London, bringing with it prophets of doom and unscrupulous swindlers hoping to prey upon the fears of the desperate citizens.

Christopher, former apprentice to the late apothecary Benedict Blackthorn, finds himself at the center of a conspiracy that will end in either a cure for the Black Death or the destruction of society. Melchior, a charismatic prophet, draws followers by predicting where the plague will strike next. The arrival of an unknown apothecary who claims to have the cure increases the frenzy. It is up to Christopher and Tom, the baker’s son, to solve the mystery swirling around both men. Desperate poverty, magical thinking, and a complete disregard for life are everyday realities for those living during the Great Plague of London. And Sands does not shy away from exploring the mesmerizing, gritty, and often terrifying details. However, Christopher and Tom’s friendship, their earnest desire to help others, and their bravery more than make up for the dark reality. The addition of the plucky and fearless Sally provides the perfect balance for the loyal friends. An author’s note offers historical details as well as the shocking revelation that the plague remains a serious threat today.

Another stunner proves a worthy sequel to The Blackthorn Key (2015).