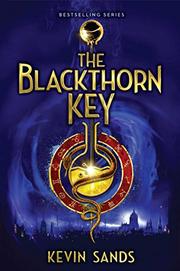 From the Blackthorn Key series, volume 1

It is 1665 London, and the streets are filled with orphans, thieves, madmen, and a few young apprentices as eager to have fun as to learn their trades.

Fourteen-year-old Christopher is luckier than most. The apothecary Master Benedict Blackthorn is both intelligent and kind, forgiving both Christopher’s mistakes as well as his ill-planned pranks. But when the Cult of the Archangel kills his master, Christopher is determined to complete his master’s work and bring the killers to justice. However, all he has for help are his friend, baker’s son Tom, and a hastily scribbled coded message from his master. This stunning and smart mystery is made even better by well-researched historical detail, intriguing characters, and genuinely funny moments. Whether accidentally shooting the shop’s taxidermed bear with his homemade gun powder or outsmarting a ruthless cult of killers, Christopher makes a terrific protagonist, but it’s his love for his friends and master as well as his fearless intellectual curiosity that make him a true hero. An epigraph sagely, if unnecessarily, warns against employing the many 17th-century remedies. While many readers will love the story, it is unlikely they will try a recipe for saltpeter that involves marinating pigeon droppings in urine—but they will revel in reciting it at dinnertime. An author’s note discusses standardized spelling and the Gregorian vs. Julian calendars.