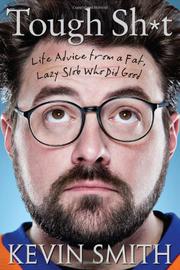 Life Advice from a Fat, Lazy Slob Who Did Good

The slacker raconteur (slackonteur?) chronicles his offbeat career while seeking to inspire the next generation of creative thinkers.

Since bursting onto the indie scene with Clerks in 1994, Smith (My Boring Ass Life: The Uncomfortably Candid Diary of Kevin Smith, 2007, etc.) has carved out a unique niche, writing and directing a string of movies both critically praised (generally for the sharp writing) and panned (often for the lackluster directing), while also developing a cult following as a pop culture lecturer extraordinaire. Drawing on experiences from his eclectic career, he presents a mixed bag of self-deprecating humor, self-satisfied mooning, gossipy snark and a few truly golden nuggets of wisdom. Among the narrative’s high (or low) points are Smith’s contention that directing Bruce Willis was the equivalent of being held hostage by Hans Gruber; the tale of how mentor Harvey Weinstein, whom Smith has loyally defended for years, stiffed him at the opening of Smith’s Red State (the two haven’t spoken since); an in-depth account of Smith’s well-publicized eviction from a Southwest Airlines flight for being overweight; and a graphic description of a bout of self-gratification, which transpired as he stood behind his grudgingly tolerant, naked wife as she readied herself for an evening out. Though his never-ending cavalcade of bodily fluid–filled jokes wears thin, there’s a fascinating revelation within these pages: Despite having produced beloved and influential indie movies and critically acclaimed comics, Smith’s most innovative creation might just be Kevin Smith—a foul-mouthed, blarney-tongued pop culture savant who has built a touring and podcasting empire by mixing piquant loquacity with a heavy dose of Jersey earthiness.

Filthier than it needs to be, more self-aggrandizing than it should be, but more inspiring than you’d think it could be.