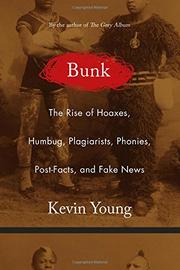 For whatever reason, Americans have always thrilled at being conned: thus televangelists and bullshit artists. Thus Herman Melville’s great novel The Confidence-Man, and thus the result of the most recent presidential election. By Young’s vigorous, allusive account, the suckerdom whose numbers are added to every minute has no end of choices when it comes to shopping for bunkum. What makes this book a valuable addition to the literature—otherwise, it might just be an update to Daniel Boorstin’s half-century-old study The Image—is Young’s attention to the racial component: P.T. Barnum built his fortune, after all, on the backs of people like Joice Heth, billed as a supposed 161-year-old wet nurse to George Washington, and putative cannibals from the South Pacific, and the like. Much bunkum had to do with the clash of cultures and races, from the mundane to the fabulous. Young’s wide-ranging text takes in not just circus sideshows, but also the literary/journalistic fabulations of JT LeRoy, Stephen Glass, Jayson Blair, Lance Armstrong, and other exemplars of what Young calls the “Age of Euphemism.” Oh, and Rachel Dolezal, too, who infamously tried to pass as black not so long ago: “Did Dolezal really fool those black folks around her? I have a strange feeling she didn’t, that many simply humored her. You have to do this with white people, from time to time.” If that doesn’t stir up identity-politics conflict, then nothing will….

A little harsh here, a little overstated there, but all in all a fascinating, well-researched look at the many ways Americans hoodwink each other, often about race.