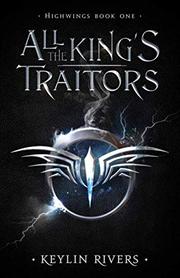 ALL THE KING'S TRAITORS

The kingdom of Azanthea is ruled by the all-powerful God-King Apollyon. In this world, mysterious Godstones fall from the sky, giving elemental magical powers to those who touch them first, making them “Wielders.” The royal army comes to the small village of Zar and attempts to conscript young Kuba before he’s even 13 years old and force him to work for the government as a Historian. Kuba escapes with the help of his brother, Ion, but only with the help of a mysterious, renegade Wielder named Aurelia. The three of them journey across the world in search of other rebel Wielders who could help them rescue Ion’s parents from Apollyon. Meanwhile, the famous Vallich has been raised as a Wielder and child-warrior in the capital Azul; he is well-regarded as Apollyon’s second-in-command. After reading a fateful letter, Vallich has misgivings about the God-King, which leads him to reach out to his close friend Kari, who encourages him to remain loyal. However, after Vallich disappears, Kari is given the opportunity to take his place. The ensuing “Ascension Trials” test Kari’s resolve as a peaceful person and test her belief in the righteousness of the God-King’s choices. Throughout, the novel presents a thorough history of the Godstones, the shifting borders within Azanthea, and the war that the God-King has waged in order to tighten his grip on the world. The conversations between Aurelia, Ion, and Kuba effectively show the complexity of the characters. Exciting, Godstone-driven battles showcase the extent of the Wielders’ power, as well as the toll that Wielding exacts. Fans of high fantasy will be drawn in by the loyalties and betrayals that color the characters’ choices, as well as the reversals provided by the elemental Godstones. The final chapters offer some resolution, but mostly aim to build readers’ anticipation for coming battles and victories in the next two installments of the Highwings Trilogy.

An intricate, fast-paced tale that’s full of history and magic.