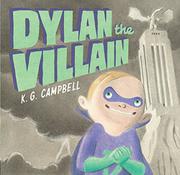 Dylan Snivels wants to make a name for himself.

Many kids would find being called Dylan the Villain a source of distress. But Dylan Snivels considers the nickname a badge of honor. Born with a mask over his eyes and a wicked smile, he attends Astrid Rancid’s Academy for the Villainous & Vile—a school with a refreshingly honest name. His parents are always assuring him that he’s “the very best and cleverest super-villain in the whole wide world!” But he has competition: Addison Van Malice’s evil laugh is 10 times crazier than his, and her robot might win the diabolical-robot contest. (It has a freeze ray and a shrink ray.) The battle ends on a cliffhanger, which is fitting for a superhero story but a little anticlimactic in a picture book. Campbell paints great Rube Goldberg–style devices, though, and the book is sprinkled with terrific jokes. The funniest passage will comfort a lot of parents: “super-villain babies are much like any others. They don’t like bedtime. They throw their food.” The story feels slight, but the details are clever enough to make it worth reading: students wear hats shaped like shark fins and land mines, for instance. Dylan and Addison are both white, but Astrid Rancid’s has a few students of color (Principal Sinister is a green, warty monster).

Dylan may have his flaws, but he does his name proud.