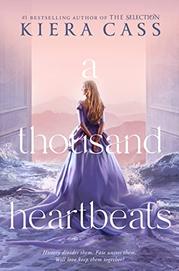 Star-crossed lovers are on opposing sides of an impending war.

Annika, the princess of Kadier, believes in the love of fairy tales but knows it’s not in her future since her father demanded she marry to secure a political alliance. Not too far from their kingdom, there is a growing army of those who believe Kadier rightfully belonged to their ancestors, and they plan to reclaim it. When stoic, hardened soldier Lennox is given the opportunity to prove himself, he makes a plan to sneak into the kingdom. Neither Annika nor Lennox is prepared for the ways their lives and those of everyone around them will forever be changed upon their meeting. They start as enemies, but their hearts have other ideas, and soon their love is impossible to ignore. This stand-alone fantasy romance shifts between the two protagonists’ points of view, giving readers access to the interior lives of both. Patience is required, as the tale is slow to start; it finds its footing eventually, but readers may find it to be too little, too late. Much of the narrative feels bloated with story yet hollow in characterization and emotional depth. Even moments meant to evoke big emotions, like important deaths or grand romantic gestures, wind up falling flat since there’s not enough substance to give them weight. Characters are assumed White.

What should feel epic and romantic winds up dull and uninspired.