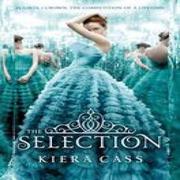 From the Selection series, volume 1

It's a bad sign when you can figure out the elevator pitch for a novel from the get-go.

In this case, if it wasn't "The Bachelor meets The Hunger Games," it was pretty darn close. In a rigid, caste-based dystopian future, Illéa’s Prince Maxon has come of age and needs to marry. One girl will be chosen by lottery from each province to travel to the Capital and live in the palace so the prince can make his choice. The winning girl will become queen, and her family will all be elevated to Ones. America, a Five, doesn't want to join the Selection because she is in love with Aspen, a Six. But pressure from both her family and Aspen causes her to relent, and the rest is entirely predictable. She's chosen, she goes to the palace, she draws the ire of the other girls with her beauty and the interest of the prince with her spunky independence. Prince Maxon is much nicer than she expected, but she will remain loyal to Aspen. Maybe. Shabby worldbuilding complements the formulaic plot. Scant explanation is made for the ructions that have created the current political reality, and the palace is laughably vulnerable to rebels from both the North and the South, neither of whom are given any credible motives. But there's lots of descriptions of dresses.