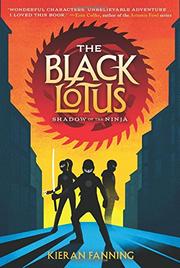 Shadow of the Ninja

In an alternate future, the Samurai Empire has taken over most of the world. The only hope for the United States, one of the few remaining independent countries, rests with a trio of kids and a secret organization of ninjas.

Ghost, a dark-skinned Brazilian, can turn himself invisible. Cormac, a redheaded white Irish boy, has incredible speed and endurance, and Kate, a blonde, white New Yorker, can communicate with animals. All three are recruited by Makoto to join the ranks of the Black Lotus, a group of multicultural, multiracial ninjas charged with protecting the Moon Sword from the evil President Goda, leader of the Samurai Empire. Goda seeks to reunite the Swords of Sarumara, releasing their power. When Ghost is tricked into stealing the Moon Sword, he, Cormac, and Kate must travel through time to ancient Japan and retrieve the powerful weapon. While the premise is intriguing, the execution is poor. It is unclear why some possess special abilities or why neophyte ninjas are sent to save the world instead of seasoned warriors. A disorganized plot, cringeworthy scenes (Kate leads an army of zoo animals through New York), and poor pacing are more than frustrating. And then there’s the questionable premise; despite the prominence of Makoto, the demonization of the Japanese is unfortunate.

This is one ninja story that should have remained a secret.