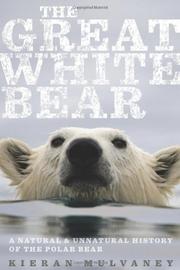 A Natural and Unnatural History of the Polar Bear

An up-close look at the world’s only truly carnivorous, largest and perhaps most threatened species of bear.

For some years now, scientists have used the Arctic ecosystem as a barometer to measure the effects of global warming. They’ve monitored what appears to be an unprecedented shrinking of the extent and thickness of sea ice, the southern limits of which circumscribe the range of the polar bear. Wholly dependent upon the shifting platform of the sea’s frozen surface—the bear slowly and silently stalks the ice in search of its principal prey, seals—the bear stands atop the Arctic chain of being and has emerged as the poster-child for what we stand to lose if global warming proceeds unabated. A specialist in environmental and wildlife topics, Mulvaney (The Whaling Season: An Inside Account of the Struggle to Stop Commercial Whaling, 2003, etc.) relies on the scientific literature, historical records and especially his own on-scene reporting to tell the bear’s remarkable story. How the bears evolved, how they mate, give birth, hunt, feed and swim are all part of Mulvaney’s treatment. He scatters throughout any number of fascinating facts about these enormous mammals: their dens carved from snow drifts, their elongated skulls and sharp teeth for seizing seals, their black skin and unpigmented (not white) fur, their solitary nature, their occasional cannibalism and their powerful sense of smell. Beautiful descriptions of the stark Arctic, tales from early polar explorers about their bear encounters, explanations about how modern scientists keep tabs on the bears and a short history of the international agreements that protect them all make for interesting reading. However, the high point of the narrative is Mulvaney’s trip to Hudson Bay’s Cape Churchill, where the bears congregate at the beginning of each season. He describes the town’s heroic measures to accommodate the bears and describes a memorable a trip to the Tundra Buggy Lodge to observe them as they prepare to head out onto the sea ice.

A graceful account of a majestic, suddenly fashionable predator clinging to an imperiled habitat.