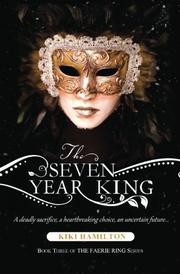 Hamilton (The Torn Wing, 2012, etc.) revisits the fantasy world of Faerie in the third book of her young-adult series.

Tiki, a 16-year-old former pickpocket, must accept her newly discovered destiny as the Seelie queen and become the leader of a world she doesn’t understand—and, quite frankly, doesn’t really want to rule. Her heart is back in London with her cobbled-together family of former street orphans, but now the entire future of Faerie is resting on her shoulders. When she discovers that a dear friend, Dain, has been kidnapped by the Unseelie king to be tortured and sacrificed, she and her lover, Rieker, must brave the secrets and dangers of Faerie to save him. At the same time, she tries to manage her duties as queen and spar with Larkin, a faerie with a suspicious agenda. Tiki and Rieker go deep into the nefarious politics of the Otherworld, but their creativity and bravery save the day. Despite Tiki’s courage in her quest to find her missing friend, her constant need for Rieker’s reassurance makes her appear somewhat weak and insecure. The novel’s suspense and action keep things moving, but its extensive reliance on back story sacrifices some of its intensity while providing very little character development. Tiki becomes more invested in her role as queen by the end of the story, but readers may find her evolution is too linear and one-dimensional. However, Hamilton’s layered, complex worldbuilding creates a marvelous landscape of both London and the Otherworld. The fantasy world’s lore is intriguing and well-conveyed, making it easy for readers to navigate as the story progresses. Hamilton’s prose also contains moments of pure, poetic beauty that ensnare the reader with their magic: “It’s like time is fractured….As if one foot is in the past, when this building was alive and full of people—and one foot in the future, left with only the memory of what has been.”

A solid YA fantasy with moments of brilliance.