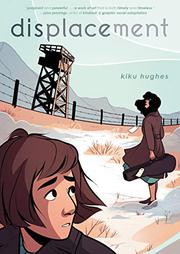 Sixteen-year-old Kiku, who is Japanese and white, only knows bits and pieces of her family history. While on a trip with her mother to San Francisco from their Seattle home, they search for her grandmother’s childhood home. While waiting for her mother, who goes inside to explore the mall now standing there, a mysterious fog envelops Kiku and displaces her to a theater in the past where a girl is playing the violin. The gifted musician is Ernestina Teranishi, who Kiku later confirms is her late grandmother. To Kiku’s dismay, the fog continues to transport her, eventually dropping her down next door to Ernestina’s family in a World War II Japanese American internment camp. The clean illustrations in soothing browns and blues convey the characters’ intense emotions. Hughes takes inspiration from her own family’s story, deftly balancing complicated national history with explorations of cultural dislocation and biracial identity. As Kiku processes her experiences, Hughes draws parallels to President Donald Trump’s Muslim ban and the incarceration of migrant children. The emotional connection between Kiku and her grandmother is underdeveloped; despite their being neighbors, Ernestina appears briefly and feels elusive to both Kiku and readers up to the very end. Despite some loose ends, readers will gain insights to the Japanese American incarceration and feel called to activism.

A timely and well-paced story of personal discovery.