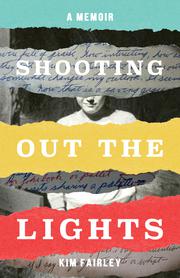 SHOOTING OUT THE LIGHTS

A wife comes to terms with her husband’s troubled past in this memoir.

“You were a preservationist, and I needed preserving,” joked Vernon, Fairley’s future husband, reflecting on his motivation for asking her out on a date. When they met, Vern, who was 32 years the author’s senior, was struggling to cope with the tragic death of his 14-year-old son, Ben, who was shot accidentally while playing with a revolver. Fairley fell in love with Vern’s “quirkiness”; they married, and, three months later, on her 25th birthday, the author discovered that she was pregnant. Soon after, Vern announced that the son of a recently deceased friend would be coming to stay with them temporarily. Taking care of 11-year-old Stanislaus was not what Fairley had expected during pregnancy. The situation became yet more fractious when Stanislaus was found to be a disturbed child, setting his bed afire and stabbing the family dog. With Vern’s health in decline, the stress of caring for Stanislaus forced the couple to reassess their marriage. The author strives to understand her husband’s inner struggles and, in doing so, unpacks some startling “sealed memories.” Fairley’s memoir is part mystery, leaving the author (and the audience) to guess at Vern’s true motives for taking in Stanislaus. Fairley’s slow reveal makes for absorbing reading. Throughout the volume, she maps her shifting emotions with a candid clarity: “I felt myself slump. In that moment, I realized another reason I had resisted Stan’s presence so fiercely: time was a commodity in my relationship with Vern.” The author has an occasional tendency to share extraneous information. Describing their dog, Chippie, she notes: “He’d developed a severe anal sac problem and would scoot along the floor, leaving oily anal juice on everything.” Fairley’s scrupulous attention to detail is put to better use when capturing the ambience of small-town Ohio: “I loved the screened-in porch, the way it overlooked the old footbridge with the cast-iron street lamp….The old furnace pumped out heat that smelled of kerosene in the winter.” At its best, the author’s writing is evocative, and her story is both unique and intriguing. Despite the sporadic digressions, this is a book that many readers will find difficult to put down.