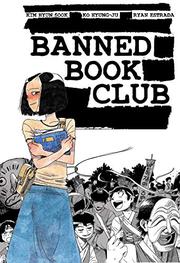 In 1983 South Korea, Kim was learning to navigate university and student political activism.

The daughter of modest restaurant owners, Kim was apolitical—she just wanted to make her parents proud and be worthy of her tuition expenses. Following an administrator’s advice to avoid trouble and pursue extracurriculars, she joined a folk dance team where she met a fellow student who invited her into a banned book club. Kim was fearful at first, but her thirst for knowledge soon won out. As she learned the truth of her country’s oppressive fascist political environment, Kim became closer to the other book club members while the authorities grew increasingly desperate to identify and punish student dissidents. The kinetic manhwa drawing style skillfully captures the personal and political history of this eye-opening memoir. The disturbing elements of political corruption and loss of human rights are lightened by moving depictions of sweet, funny moments between friends as well as deft political maneuvering by Kim herself when she was eventually questioned by authorities. The art and dialogue complement each other as they express the tension that Kim and her friends felt as they tried to balance school, family, and romance with surviving in a dangerous political environment. References to fake news and a divisive government make this particularly timely; the only thing missing is a list for further reading.

A tribute to young people’s resistance in the face of oppression.