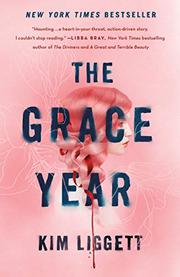 A rebellious 16-year-old is sent to an isolated island for her grace year, when she must release her seductive, poisonous magic into the wild before taking her proper place as a wife and child bearer.

In gaslit Garner County, women and girls are said to harbor diabolical magic capable of manipulating men. Dreaming, among other things, is forbidden, and before girls embark on their grace year, they hope to receive a veil, which promises marriage. Otherwise, it’s life in a labor house—or worse. Strong, outdoorsy, skeptical Tierney James doesn’t want to be married, but a shocking twist leaves her with a veil—and a dangerous enemy in the vindictive Kiersten. Thirty-three girls with red ribbons symbolizing sin woven into their braids set out to survive the island, but it won’t be easy. Poachers, who trade in the body parts of grace-year girls, surround the camp, and paranoia, superstition, and mistrust rule. Not everyone will make it home alive. The bones of Liggett’s (The Unfortunates, 2018, etc.) tale of female repression are familiar ones, but her immersive storytelling effortlessly weaves horror elements with a harrowing and surprising survival story. Profound moments lie in small details, and readers’ hearts will race and break right along with the brave, capable Tierney’s. The biggest changes often begin with the smallest rebellions, and the emotional conclusion will resonate. All characters are assumed white.

Chilling, poignant, haunting, and, unfortunately, all too timely.