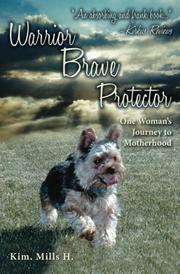 A debut memoir details the struggles of a wife with ulcerative colitis and infertility.

When Mills H. and her husband, Rob, adopted their Yorkshire terrier puppy, they named him Riley, to fit with the breeder’s preference and to allude to the expression “life of Riley.” The fact Riley also meant “brave” was a happy coincidence. Just a year earlier, the couple had lost their son, Chad, who was stillborn after his mother’s struggle with ulcerative colitis during pregnancy. Determined to have another child—the daughter both the author and her mother-in-law had strong premonitions Mills H. was destined to deliver—the couple tried intrauterine insemination and in vitro fertilization. Eventually, when Mills H.’s half sister, Michelle, volunteered to be a surrogate carrier, the author leapt at the chance. Finally, she achieved her lifelong dream of motherhood when her daughter, Skylar, was born. Chad’s name means “Warrior” while Skylar means “Protector”—hence, the work’s title. While the memoir primarily focuses on the author’s infertility, her ailments—which contributed significantly to her child-bearing issues—also figure prominently. Additional autobiographical information provides relevant content for her story. All her life, Mills H. looked forward to becoming a homemaker and mother, and she highlights the women in her life who were fortunate enough to have that role. After a false start with a first husband she had to support, the author met and married Rob, a private pilot to celebrities. Of the few secondary characters in the book, Rob remains the most shadowy and one-dimensional, little more than the often traveling spouse. Mills H.’s mother and mother-in-law, and later her half sister, provide the emotional support and care she needs during her trials and are more developed characters. The compelling account does not break new ground in the realm of fertility challenges, but Mills H. is a deeply sympathetic character, although not all readers will identify with her aspiration to be a homemaker. Further, her brushes with celebrity (Thanksgiving and a trip to Greece with Kevin Costner) and her luxurious, golf club community home make her less relatable. Despite her seemingly lavish lifestyle, her medical and fertility problems emphasize her vulnerability.

An absorbing and frank book that chronicles the author’s triumph over health and personal crises.