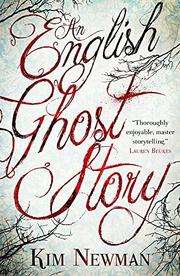 The perennial reinventor of classic horror turns his sights on the traditional English haunted-house story.

The Naremores, having suffered through an epic family meltdown, decide to move from London to the Somerset countryside to reconnect with one another, a prospect that seems dismal at best until the family stumbles as if by magic onto the Hollow, a rambling orchard house that was, until recently, the home of twee children’s book author Louise Magellan Teazle. Miss Teazle’s series featured haunted locations and friendly ghosts, and the family begins to suspect that her stories might not have been entirely invented. The Naremores—father Steven, wife Kirsty, teenage daughter Jordan and precocious son Tim—are pulled into the orbit of the Hollow, and welcomed by its longtime ghostly inhabitants, in different ways. Kirsty finds a magic chest of drawers that makes objects disappear, then reappear after they’ve been disturbingly deconstructed; Tim plays soldier in the orchard with the spirits of the Hollow; Jordan finds her shawl floating in midair; and Steven thinks maybe, just maybe, the house will heal a rift in the family that he’d begun to think was irreparable. But it isn’t long before Miss Teazle’s irritating fan club begins imposing on the Naremores, and the ghostly presences start to turn on the family. Before long, Tim’s playing at soldier starts to seem less like a child’s game and more like preparation for an all-out ghostly war.

A tongue-in-cheek ghost story that winks at the haunted-house trope without bringing much that’s new to the table, though a few moments of genuine fright should thrill readers looking for a new take on an old classic.