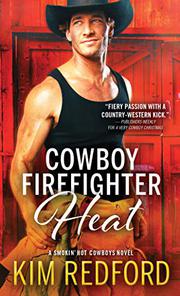 Returning to the Texas town where she and her sister bought a historic music hall, a singer learns she now co-owns the venue with her old flame.

Coming off a cruise-ship gig, Fern Bryant is ready to settle back into the small Texas town where she and her sister moved after they bought a historic dance hall from a cousin. She’s excited to raise the profile of the hall by bringing in bigger acts as well as local talent. However, when she gets back, she discovers Craig Thorne in her cabin. Craig is the area rancher, volunteer firefighter, and musician who captured her heart when she moved to town, though things fell apart when she ducked her feelings and took the cruise job. Turns out her sister sold her share in the dance hall to Craig without telling Fern, so now they're partners. At first determined to keep Craig at arm’s length, she’s back in his arms soon enough and refinds her footing in the community, which is chock full of interesting characters, including two town matriarchs who convince Fern and Craig to co-chair the annual Wild West Days festival. As things look up for Fern and Craig, an obsessive fan of Fern’s emerges to threaten their happiness. The latest title in Redford's Smokin’ Hot Cowboys series revisits Wildcat Bluff County and its quirky community; fans will especially enjoy Fernando the Wonder Bull’s heroic efforts. While Fern and Craig’s reconciliation is sizzling, the conflict sputters out pretty early, replaced by the shadowy villain’s menacing actions. At times, some of the characters' responses feel unrealistic (for example, Fern never confronts her sister for selling her share of the dance hall to Craig without saying anything), but it’s generally an entertaining, sexy read. Cowboy romance fans will find a lot to love, including the buildup to the next book.

A lively contemporary romance with touches of suspense.

THE SECRET SHE KEEPS
by HelenKay Dimon
Fiction

I AM JUSTICE
by Diana Muñoz Stewart
Newsletter sign-up