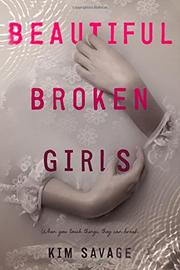 After two sisters commit suicide, the boy next door traces the notes one left behind for him.

Ben Lattanzi, a white teen toiling in small-town Massachusetts, receives a letter from Mira Cillo seven days after she and her sister, Francesca, died. They were found at the bottom of the quarry lake, tangled together. Compounding the tragedy, their cousin Connie Villela had passed away only months before. In her letter, Mira tells Ben that everyone wanted to touch her and Francesca and that by going to the seven locations he touched her, he’ll discover the truth. Ben, known as sensitive due to a public childhood trauma, becomes enamored with the notion of reconnecting with Mira, whom he briefly dated but long adored. Soon he realizes the story Mira wants to tell isn’t about her—it’s about her sister and the months leading to their fatal fall. Mira, Francesca, and Connie, all white, were bonded by shared blood and would do anything for each other. Through a haze of longing, Ben finds out just what that means as he pieces together Mira’s last messages. Told through both Ben’s and the girls’ perspectives, the mystery unfolds with aching precision—both Ben’s grief and the sisters’ pain can be acutely traced as they grow. Even though the truth can be seen before it’s revealed, the girls’ secrets pack a gut punch that lingers.