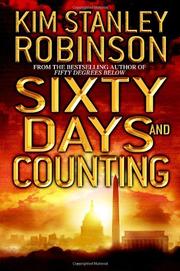 At a time of environmental crisis, America elects an intelligent, well-balanced president who has a sense of humor and listens to scientists. Get real.

You know you’ve entered a fantasy world when you discover that President Phil Chase not only has scientists among his friends and political advisors but actually knows how to blog—and does so interestingly! It’s a good thing that scientists are in ascendance in the closing volume of Robinson’s trilogy (Forty Signs of Rain, 2004; Fifty Degrees Below, 2005). The weather is still totally screwed up, thanks to America’s blowing off of the Kyoto protocol. Animals from the National Zoo still roam the D.C. suburbs, and the Sierra Nevadas are fried extra-crispy. At least the Gulf Stream is back in circulation, thanks to dedicated scientists such as trilogy hero Frank Vanderwal, who still lives among the saintly Tibetans and nurses a possibly fatal sinus problem, while wondering why his beloved Caroline is so hard to find these days. But Frank lacks time to solve the mysteries of love; he’s been called to serve in the Chase administration. President Chase has decided to spend his political capital early in the game in an effort to undo global warming and American eco-indulgence. Those are enormous tasks, but his scientist pals are willing to spend every waking hour—when they’re not kayaking or playing Frisbee or golf—exploring such ideas as piping the rising oceans into the central continental deserts. Lives are complicated by persistent blackouts of the power grid and sabotaged by super-sneaky intelligence agencies left over from the previous administration. Thank goodness for the occasional visit from the Dalai Lama.

Fitfully interesting but much too long. In the future, apparently, there will be no editing.