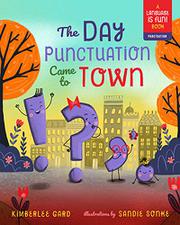 THE DAY PUNCTUATION CAME TO TOWN

The Punctuation family has arrived in Alphabet City.

Exclamation Point, Question Mark, Comma, and Period are ready to attend school. Everyone is excited except shy Comma with his large, round, red glasses. The other siblings know their special jobs when they meet their fellow students, the alphabet letters. “But Comma? Comma tried not to get stepped on and fit in wherever he could.” The accompanying double-page illustration demonstrates each symbol’s important role: “wow” ends with Exclamation Point, “who” ends with Question Mark, “stop” ends with Period—and Comma tries to break up “ohno” but has a hard time inserting himself. (No capital letters here, as these letters are children.) The variously colored alphabet letters and the purple punctuation symbols take on singular personalities with amusing human features: pipestem arms and legs, baseball caps, hairstyles, glasses, faces, and freckles. Purple letters in the text emphasize the symbol names, although the contrast makes this fairly ineffective. As the story develops, the letters get a little rambunctious, the punctuation symbols work hard to organize them, and Comma realizes his essential place. “From now on, I’ll help keep things in order.” The story is slight, but with adult intervention, it could serve as an introductory look at punctuation in settings where the detailed, humorous illustrations can be seen up close.

Lighthearted, cursory look at the symbols needed to make sense of English writing.