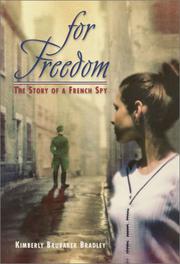 The Story of a French Spy

Suzanne David’s father always said, “Obey the rules and no one gets hurt.” But when their French town of Cherbourg is bombed, her neighbor is killed, the Nazis take over, and her family is turned out of their house, whose rules does she obey? When one of the few black families in Cherbourg disappears, Suzanne says to her Papa, “I thought Hitler only hated Jews. I didn’t know he hated black people too.” “Now you do,” he replies. It is this growing awareness, step by step, that leads to Suzanne’s involvement in the French Resistance, becoming number 22, and relaying messages essential to the planning of the D-Day invasion. Based on Bradley’s interviews with the real Suzanne, this is an exciting account of a girl’s coming of age in a scary time. The historical context is neatly woven into the story, so readers will learn about Dunkirk, the fall of Paris, Vichy France, Charles de Gaulle, and D-Day. A terrific companion to Gregory Maguire’s The Good Liar, but for an older audience. (Fiction. 10-14)