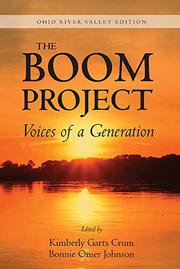 Voices of a Generation

In this collection, debut editors Crum and Johnson compile works by boomers born in the years 1946 to 1964. The pieces present many of the typical ’60s tropes—the Vietnam War, Kent State, the assassinations of John F. and Robert F. Kennedy and the Rev. Martin Luther King Jr., the rise of feminism, and the styles of the era. Yet the most memorable works in this book go beyond these expectations to supply insights that supersede boomer generational concerns. Divided into five sections, the first part explores the Ohio River, and the second examines the boomer generation. Sections three and four concentrate on the coming-of-age and maturing of the ’60s generation. The final section provides stories and poems dealing with home as a refuge and place of security. “What you will find here are more questions than answers, more searching than certainty,” Crum asserts in introducing the 47 authors—some published and some unknown—and their works. For example, E.G. Silverman’s story “Bagel Macher” vividly portrays the characters who inhabit a bagel shop but not much of the ’60s ideas that typify many boomer-centered tales. This anthology also stretches the meaning of the term “boomer.” John Limeberry’s story “Child of the Sixties” delivers the ruminations of an author born late in the boomer cycle (1962), a writer who has no personal recollections of the signal events and personages that so typify that era. Not all of the work that the editors—who are Louisville, Kentucky, writing coaches—have selected comes from the Ohio River region. Reed Venrick’s superb poem “Success of a Cypress,” which skillfully looks at the Cypress swamps of Florida using humor and self-reflection, has little to do with the Ohio River or boomer-ism. Varying quite widely in style, some fictional, autobiographical, and poetic gems emerge from this compendium for readers who are willing to journey through these pages.

An illuminating collection that focuses on the boomer generation.