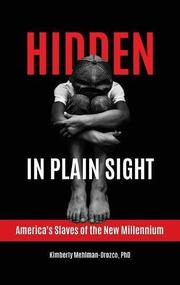 America's Slaves of the New Millennium

A brief but exhaustive debut book looks at human trafficking.

Slavery remains a stubborn feature of the modern world; in fact, some specialists say that there has never been more of it. Even worse, citizens’ inadvertent sponsorship of it is simply unavoidable. According to Mehlman-Orozco, “Unfortunately, every single American has used, consumed, worn, and purchased products of slavery at multiple points throughout their life.” But very little of this phenomenon conforms to the public’s general perception of slavery’s nature, partly due to persistent mischaracterizations in the media. The author, an expert in human trafficking with a Ph.D. in criminology, law, and society from George Mason University, explains that various kinds of coerced labor exist all around us. And while some of that trafficking is a function of kidnapping and physical imprisonment, much of it is far subtler, the result of varying strategies of duress designed to deceive the vulnerable. Mehlman-Orozco distinguishes between two primary types of human trafficking: sexual and labor. In the case of the former, there are many different iterations, ranging from the child runaway defrauded into believing she was being given a shot at a better life to newly arrived immigrants duped into long-term indentured servitude, coerced into using their bodies to pay off debt. Labor trafficking is more common and less effectively policed; Mehlman-Orozco discusses a nail salon that imports new technicians from Vietnam and then compels them to work interminable hours for meager pay. Her meticulous research is based not only on a survey of the available literature, but also on her own interviews with victims, perpetrators of human trafficking, and the consumers who patronize their businesses. Mehlman-Orozco’s prose is both lucid and emotionally stirring, and she often illustrates her points with personal anecdotes to paint a picture that transcends statistical analysis. The subject matter can be disturbing—the chapter devoted to child sex tourism is particularly harrowing—but she navigates that dark terrain with grace and professionalism. She helpfully suggests a number of ways the response from law enforcement could be greatly improved, including empowering otherwise disenfranchised victims to come forward.

An intellectually rigorous and emotionally affecting account of modern enslavement.