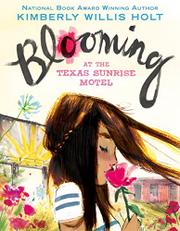 BLOOMING AT THE TEXAS SUNRISE MOTEL

Thirteen-year-old Stevie thought her mother’s father was dead—until her parents’ unexpected deaths result in her traveling from New Mexico to her grandfather’s motel in Texas.

Olive-skinned, blue-eyed Stevie recounts in present tense the months following her parents’ deaths. On board the bus to meet her grandfather, a clear picture emerges of her previous life with her parents, farmers with a small farm and a roadside stand. By the time she has reached the bus station, readers have learned some of her background and her dreams—and that the only taboo topic in her happy home was her parents’ families. As she meets her grandfather, his employees, and the disabled couple who permanently occupies one of the run-down motel’s rooms, Stevie rises to the occasion of forging a new life for herself, partly by using her gardening skills. She processes her grief and her new relationships with a winning combination of grace, mistakes, humor, contemplation, and determination. By the end of less than a year, many positive changes have occurred. The one disappointment for readers is best summed up by Stevie after her grandfather has finally answered many of her questions about her parents: “I thought his telling me more about what happened would answer everything. But it’s like he’s given me a jigsaw puzzle with pieces missing.”