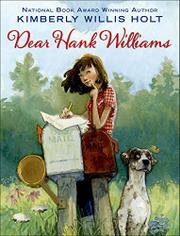 Tate has gumption, and it's a good thing: She’s the only one who has faith in her ability to sing—except for her little brother, Frog, and everyone seems surprised whenever Tate mentions him.

Tate explains all this and more in her pen-pal letters to Hank Williams. Her teacher has arranged an exchange of letters with Japanese students, but it's too soon after World War II for Tate’s comfort; besides, she and Hank have singing in common. Sassy and observant, Tate also tells him how her parents travel while she lives in a house by a cemetery with her aunt, uncle and Frog. She helps Aunt Patty Cake sell cosmetics—except in Pine Bend where colored folks live, but her aunt won’t explain why this is. Writing proves therapeutic, and Tate begins to revise half-truths: She has no idea where her father is, and Momma is in jail. And Tate almost gives up the idea of the talent contest she’s had her heart set on entering when her new dog, Lovie, goes missing: She’s too sad to sing. It's while searching for Lovie in the cemetery that Tate faces, finally, the lie she's been telling herself about her most sorrowful loss. Real to the period and place, subtle and gently paced, Tate's story is heartbreaking but hopeful; when she sings, Tate remembers the good times.