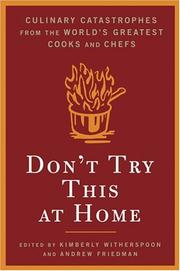 DON’T TRY THIS AT HOME

Take a handful of culinary masters, toss in stories of utter humiliation or heartache, and you wind up with a spicy little essay collection with a flavor not unlike that of America's Funniest Home Videos, in which the most successful vignettes are invariably those in which the subjects suffer the most. And there is plenty of room for misery in a kitchen. The collection begins with the worst day in the professional life of Ferrán Adrià. Dubbed “the Salvador Dalí of the kitchen” by Gourmet magazine, Adrià was preparing to whip up a private dinner for 3,200 guests when he discovered that the lobsters were spoiled. A disaster, but at least he didn’t get fired. Jimmy Bradley can’t say the same; the NewYork–based chef and restaurant owner shares a story of how he got abysmally drunk on the job early in his career (he was a reluctant participant in a drinking game) and was summarily dismissed the next day. Wylie Dufresne (honored in 2001 as one of the best new chefs in the country by Food & Wine magazine) relates a story of being plagued during an apprenticeship in a French kitchen by an owl who decided to roost under his bed, while Food Network star Sara Moulton remembers the time she was tormented by an uncooperative food processor when she tried to impress her sister with mashed potatoes. And Anthony Bourdain, ever dependable, delivers the goods with a satisfyingly apocalyptic story about a disastrous New Year's Eve.

Lots of fun for foodies both ardent and casual.