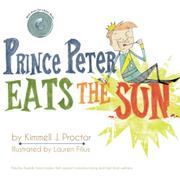 A picture book and cookbook promoting healthy eating for children 7 to 10.

Prince Peter of Sunnyvale, a picky eater, enjoys an alliterative diet, including meatballs on Monday and soup on Saturday. When he declares that his diet shall now be everyone’s, his edict is enforced via the distribution of factory-made food. But soon, nobody in Sunnyvale feels well. The prince’s advisers recommend food additives to help solve the problem, but neither vitamins nor extra flavorings improve the community’s health. Then Peter meets the royal gardener, Mrs. Sunbody, and her children, who are the only energetic people in Sunnyvale. Mrs. Sunbody, hoping to help the prince feel better, invites him to dinner, where she serves him his mandated menu, but with a twist—a secret ingredient. After she feeds the Prince and his advisers for a week, she reveals the secret: Everything they’ve eaten comes from plants, which promote health, she says, because they store energy from the sun. When an adviser suggests that the prince implement this wisdom in his factory-made meals, Farmer Sunbody delivers the book’s overt message: “[S]unny food is grown by living plants, not manufactured in processing plants.” Mrs. Sunbody becomes Peter’s food consultant, and as a result, “the people of Sunnyvale will live healthily and happily ever after!” Fun illustrations by Fillius and enticing recipes complete the picture. (Calling all of the recipes’ food-preparation steps “fun,” however, doesn’t actually make them so.) The story has a few confusing issues: Peter’s stated problem is pickiness, but the story doesn’t support this. His food choices aren’t that limited, nor is he unhealthy, until the factory versions of his food become standard fare. The fact that he’s surprised by the Sunbodies’ vegetarian versions suggests that his own diet contained meat, but this is never directly addressed. And although there’s nothing wrong with encouraging children to try vegetarian foods, the book provides no substantiation that there was anything wrong with Peter’s previous “picky” diet, which was also prepared with fresh, high-quality ingredients.

An homage to home-cooked, plant-based meals, hampered by unanswered questions.