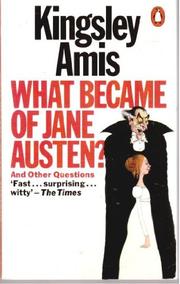 WHAT BECAME OF JANE AUSTEN? AND OTHER QUESTIONS

"The man's name is Ames," said the late Evelyn Waugh so pontifically that the discussion of Mr. Amis's work was broken off at that point. Probably Waugh was merely putting down an Angry Young Man. But, by an irony, today one notices their resemblances. Grumpy Old Men, the pair of them. (Mr. Amis somehow sounds older than his years.) Amis belongs to no church, and he avoids the self-pitying tone that marred the end of Waugh's career. But they share great concern for the imperilled decencies that should be on-going, in morals, politics, language. This latest book is made of disparate pieces with addenda and essays old and new; book reviews, discussions of cinema, especially horror films, of fictional detectives (so much better than real-life examples), reminiscences of angrier times, recovered with cheer and affection. It is light in tone but not intent. The right bright word is always in its right, striking place.