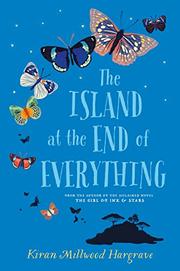 THE ISLAND AT THE END OF EVERYTHING

Life on an island for those with Hansen’s disease is all Amihan has ever known. Now she must face the outside world, ostracized for living among the lepers.

In 1906, Amihan’s mother was taken from her home to live on Culion, an island leper colony in the Philippines. Isolated from the rest of the world, Amihan loves life on Culion, and caring for her mother and watching for butterflies is all she wants to do. Then an unexpected visitor from the department of health arrives and declares that healthy children will be taken to live in an orphanage on a nearby island, away from the disease but also separated from their families. There Amihan meets Mariposa, a girl named for the butterflies, and they become fast friends. When alarming news reaches her, Amihan is in dire need to see her mother, and together the girls journey to find their way back to Culion. Narrated in the present tense from Amihan’s point of view, the writing, laced with Tagalog, is simple, but the themes and topics are heavy, such as being seen as less than human. For her second novel, Hargrave (The Cartographer’s Daughter, 2016) researched the history of the real island of Culion, and in it she captures the raw feelings of stigma, exile, and loss that came with Hansen’s disease at that time.

A heartbreaking and heartwarming must-read about love, loss, friendship, and determination in times of desperation.