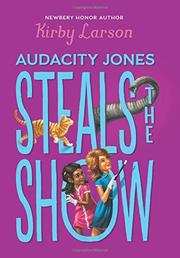 From the Audacity Jones series, volume 2

Audacity Jones returns for her next adventure, this time helping Harry Houdini in his quest to make an elephant disappear.

Making an elephant vanish turns out to have a double meaning. When the white girl and her brown-skinned friend, Bimmy, leave for New York, Min, her supremely confident cat, finds a way to follow and meets Punk, a sad, imprisoned baby elephant. In addition to helping Houdini, Min and Audacity try to rescue Punk from abusive captivity. Houdini, rather oddly for a professional magician, has not perfected his trick before running advertisements for it. Much of the book’s suspense, however, depends on that negligence. Although the first book in the series took place in 1910, Larson here fudges the historical timeline, as she explains in her author’s note. (Harry Houdini indeed performed a trick in which he made an elephant disappear, and young Archibald Leach, later the movie star Cary Grant, did perform in New York City, but much later.) Historical liberties don’t stop Audacity and her troupe—especially Min—from engaging in an enjoyable adventure while still evoking the 1910s. Larson focuses most of her story on the Houdini plotline, but the Punk plotline, which tugs at readers’ hearts, becomes the more memorable of the two. The author also promises to devote some of her royalties to The Elephant Sanctuary in Tennessee.

A suspenseful little mystery with heart.