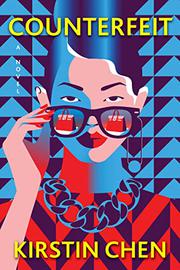 What a tangled web we weave when first we practice selling fake designer handbags.

Chen rejiggers some of the ingredients of her debut, Soy Sauce for Beginners (2014), and comes up with a winner in this clever, sharp, and slyly funny novel about a long con. Ava Wong, a Chinese American Stanford grad, has left her corporate position to be a full-time mom, but little Henri is such a terror she ends up delegating him to a nanny. Meanwhile, her surgeon husband, a Frenchman named Olivier, is working so hard to support the family that he takes an apartment near the hospital in Palo Alto. These disappointments leave her particularly vulnerable to the influence of the evil Winnie Fang. From mainland China, Winnie was Ava’s roommate freshman year of college until she had to withdraw from school under the cloud of an SAT cheating scandal. All these years later, she's back, and boy, has she changed. She’s had eyelid surgery, lost the accent, attained American citizenship, and is carrying the ultimate status symbol—a Birkin bag. A couple pages in, we learn that this narrative of renewed friendship is being delivered to a detective. It seems Ava was manipulated into working with Winnie in her global handbag scam. Her job was to buy a high-end purse at a luxury shop, then return it a few days later for credit. Meanwhile, the return is actually a meticulously counterfeited duplicate manufactured in China, and the real one is sold on eBay at a discount. As the story glides among San Francisco, Hong Kong, and China, Chen turns the stereotype of the docile Asian woman on its head. She also has great fun with status details, from collegiate Winnie’s “pink T-shirt with the words cuty pie plastered across the front in mulitcolored rhinestones” to the “rare crocodile Birkin 25, the color of merlot, of rubies, of blood...worth at least forty thousand dollars” that Ava receives during a classic over-the-top, all-night business deal.