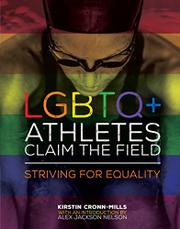 Hope is found in the past for present and future athletes who identify as lesbian, gay, bisexual, questioning/queer, or other.

In clear, readable text, the author details the prejudices faced by athletes whose gender identity does not conform with their biological sex, are romantically and sexually attracted to individuals of the same gender, or are questioning their gender identity or sexual orientation. In an effort to help break down these prejudices, multiple examples of LGBTQ athletes are presented, ranging from Bill Tilden, a tennis player active in the 1920s who came out publicly in 1948, to Michael Sam, the first openly gay man to be drafted into the National Football League. Trans and intersex athletes, such as Caster Semenya and Renée Richards, are also highlighted while exploring their unique challenges and the policies that govern their participation in sports. Discrimination against LGBTQ individuals can also extend to coaches and administrators. The positive tone and multitude of examples create the optimistic belief that LGBTQ athletes will be able to be true to themselves while competing in their chosen sports.

High appeal for both athletes and those who support LGBTQ rights.